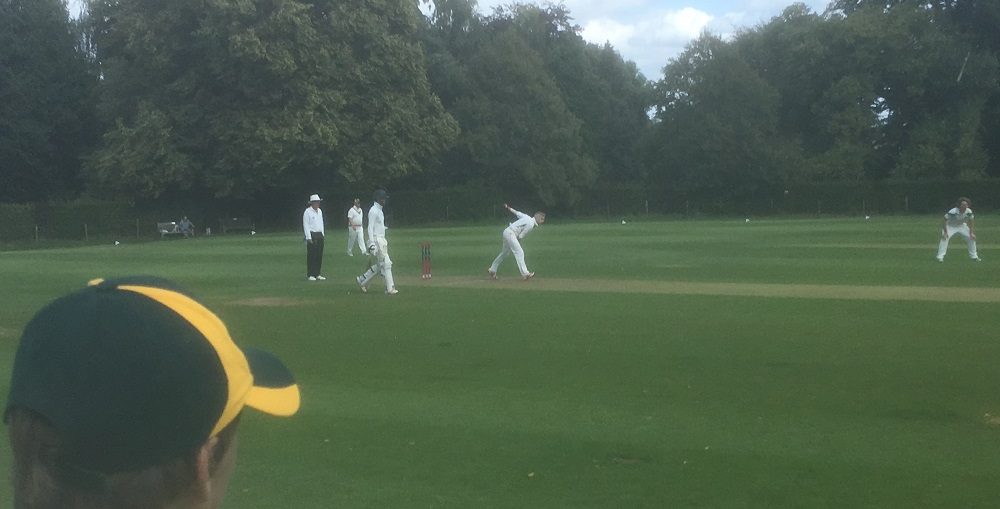 Andy Palmer had assembled a mixed XI of youth and experience: we had two father – son combos in the Campbells and the Hughes, we welcomed Hamish Fyfe back after an absence of a couple of years, we welcomed Scyld Berry and George Edwards making their début for the Queries, and we the experience of Tom Churchill, Jake Hand, Matt Haslett and Felix Plant. We won the toss, and elected to bowl first on a track which had got quite wet overnight. Openers Matt and George were reasonably economical for the first 9 overs and during their spell two brilliant run-outs from Hamish Fyfe removed both openers.  Jake Hand and Scyld Berry followed and between them conceded only 18 runs in 10 overs. The two sons, Humphrey and Jack then took 5 wickets between them, leaving 2 wickets to be shared by Felix and Hamish. 40 overs and HCCC were 171 for 9.

Our reply with the bat started well enough but it was the explosive hitting of Tom Churchill that took the game away from HCCC. He smashed 7 sixes and 9 fours on his way to an unbeaten 92 and the victory was sealed with a no-ball 6. Queries won by 5 wickets.

The Queries always enjoy the HCCC match: its a game always played in the right spirit, at a delightful ground, and with a tea to die for!  Thank you very much indeed for hosting us today.