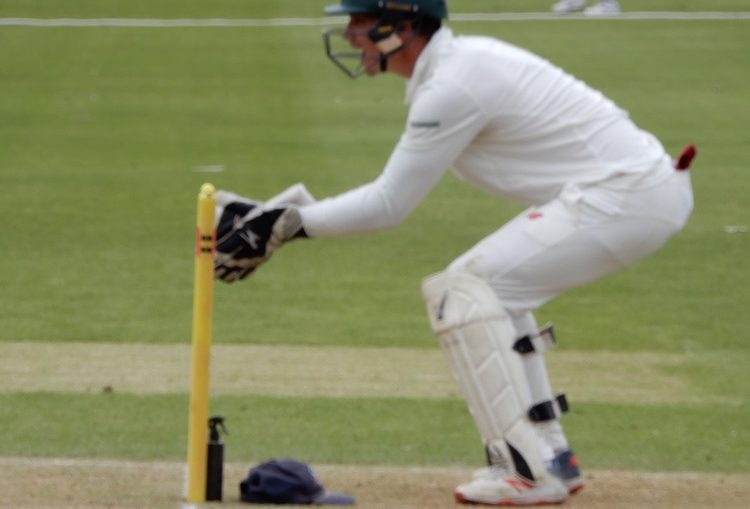 This match had everything as the chances of getting a result ebbed and flowed – Queries batting first and making a very slow start – 29 after 10, 63 after 20 – but then Tom Shaw powered on to make 133 before getting bowled, having helped the score to 206 at the declaration at 3:45pm after 42 overs. Only 3 other batsmen made it to double figures. After a sumptuous tea, The Frogs also started slowly – 35/1 after 10 – but then Richard Lawrence and Simon Slabbert decided that attack was the best option.  Both scored half centuries, Queries were beginning to make mistakes in the field but they “stuck to their guns” and when Simon was out at 180 followed by Richard at 181, the Queries confidence soared again. Once the two stars were back in the pavilion, wickets fell quickly but things were tight with Frogs starting the penultimate over needing only a run a ball with 4 wickets in hand. An over later they needed 5 to win with 2 wickets in hand thanks to some great bowling by Josh Kelly and Emmerson Wood, a super catch at deep mid wicket by Ollie Bate, and great work by Dan Pirie with the gloves. Frogs 9th wicket fell on the last ball of the last over – 203 for 9 – and the match was drawn. Cue the umpire’s call of time: cue a huge sigh of relief from the Queries: cue the opportunity to share a beer with The Frogs at the pavilion.

Pick of the batsman was obviously Tom Shaw, and pick of the bowling was Emmerson Wood with 9-1-39-4. However congratulations must also go to Josh Kelly who held his nerve in the final few overs and bowled 8-0-53-3, and Ed Olley who bowled 9-1-37-1: between the three of them they took 8 of the 9 Frogs wickets.

An exciting finish to a good day’s cricket. Many thanks to the Frogs for travelling down to play us, and many thanks to all our players for turning out to represent the Club.

Thanks too to some of the “senior Queries”, some of whom came to Tidworth to watch the game. It was nice to see Howard Moore, Bruce Gauntlett, Peter Salisbury and Club President David Haywood and we thank them for their support. 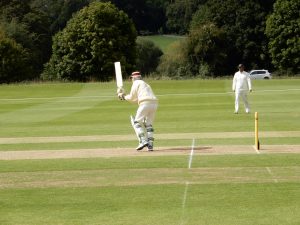 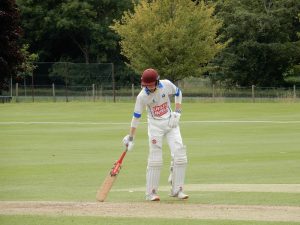 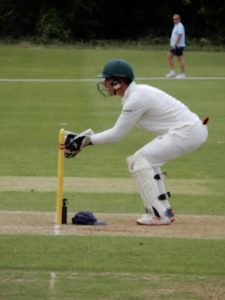 Jollyon Robertson opened the batting with Tom Shaw:  Josh Kelly came in at 3 and scored 9 before popping one up in the air:  Dan Pirie had a great day with the golves.